The power of rhythm in team building processes

Published by Hollitzer Wissenschaftsverlag in 2016: a research study about the influences of analog rhythmic interventions on team-related social skills, group cohesion and flow. For the first time Gerhard Kero was able to provide empirical evidence of the power of rhythm in team building processes.

The present work of Gerhard Kero takes the relationship between synchronization- based rhythm experience in teams and the development of team-relevant social competences, the increase of group cohesion and the occurrence of flow experiences into view. It examines the current state of research regarding the question of whether both theoretically assumed, as well as the already evident group binding effects of rhythmic interactions from the perspectives of the disciplines evolutionary biology, psychology, rhythm research, anthropology, neuroscience and competence research, can be transferred to teams in the modern world of work and to what extent they are suitable as a basis for the development of team-relevant social competences.

The evidence-based study shows that analog rhythmic interventions in controlled contexts such as das.imtakte.team© actually exert binding effects on groups in a functional sense. They extend to the social level and are therefore far more than musical adventures. They challenge and support focused participation in social action, help the participants to take a closer look at what they are doing together, increase group cohesion and turn out – particularly in terms of social competence development – to be an efficient team development action, which is also fun!

Results of the empirical study

The empirical study was carried out in the form of a quantitative survey with 252 respondents who participated in one of 15 das.imtakte.team© – team drumming events in the period July 2014 to February 2015.

During and immediately after the team drumming event, strong positive connotated changes were noticed.

Immediately after the team drum event, the participants were asked about the characteristics and effects that their team could generate through analog rhythmic intervention. An unequivocal result provided the question of the group experience: to the question of whether the drum event was a positive experience for the group, all respondents without exception, including the critical and skeptical, answered with yes. This points to the community-building effect of the intervention. 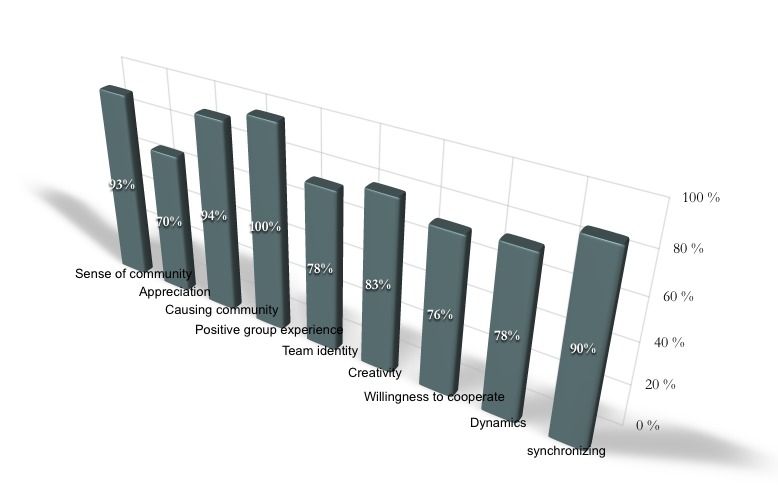 The next bar chart is self-explainimg, we see it as confirmation of our work.

Even the 8% group of people (n = 20), who did not initially have a positive attitude towards the team drumming event, had a mostly very positive overall impression of the team experience. An overwhelming majority of 85% stated that their impression changed positively. 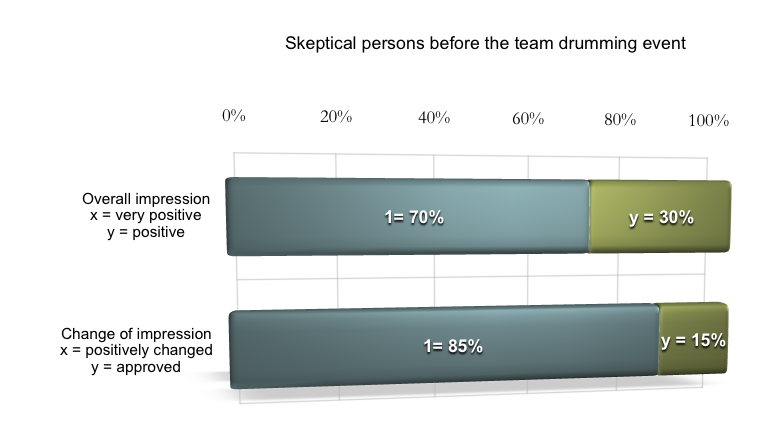 More than 75% of these initially skeptical participants would recommend the format and only 5% would rather not participate in a team drumming event in the future.

For all participants without exception, the team drumming event was a positive team experience. Over 90% perceived a strong sense of community, a community-building and synchronizing effect of rhythm, would participate again, would recommend das.imtakte.team© and felt supported by the group. More than 75% saw cooperation and team spirit brought into their team and experienced flow. The stronger this was, the more joy was felt. Regardless of team parameters, communication was stimulated and for more than two-thirds of the respondents trust was brought in the team and and sustainably strengthened. The perception of a respectful and tolerant atmosphere increased significantly during the team drumming event. More than 80% was able to adapt to the collective rhythm. Regardless of age, gender and formal education, more than 60% saw social competence brought in their team, less than 10% disagreed.

Teams in tact are intact. The research result shows that rhythm experience in the team can be a basis for the development of social competence fields, and thus of benefit in the work-sharing context.